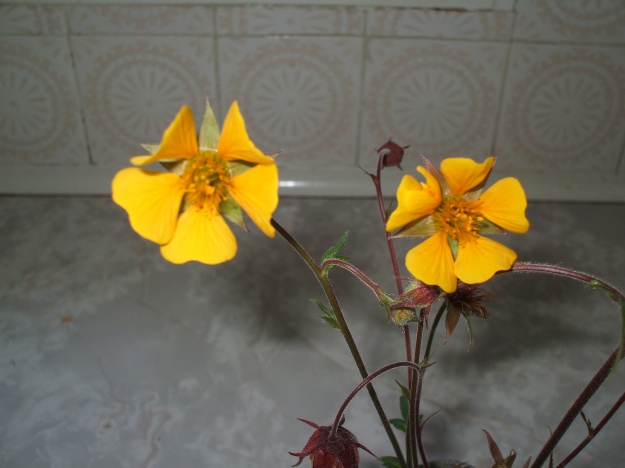 The Kowhai trees have finished flowering and so the Tuis need to find other food to sustain them. Tuis have proved to be versatile and adaptable birds which enjoy nectar from introduced trees and plants as well as native trees and flaxes.

It is well over 1.7 metres tall so not really a dwarf. It is bursting, slowly, into bloom at the moment and I am now treated to the following Tui antics if I am working at the bench.

The tall, wide spreading Melia tree stands above the Bottle brush and provides superb perches for Tui to rest on, sing from and to launch off into the nectary goodness of the bottle brush below.

There is no wing flapping, just a simple drop off this branch into the slender branched bush.

The drop reminds me of children “bomb” diving off the side of a swimming pool.

As the Tui lands the bush shakes and shivers and continues to do this while the bird moves about finding its next feed.

The shaking and shivering often alerts me to the fact that somewhere in the bush a Tui is feeding. Every so often a head pops up or as happened yesterday the flowers, highest and closest, to the house prove irresistible. 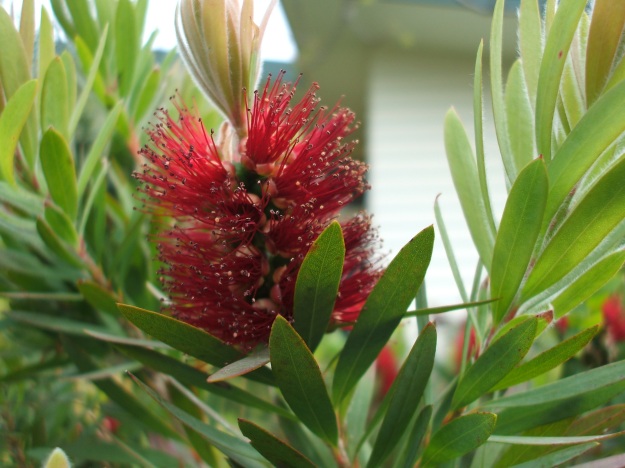 Getting to take a photo of any or all of these antics is tricky. The front door opening close by sends the Tui fleeing and standing near the bush waiting for a photo opportunity has not resulted in any activity. Tuis are wily birds.

Taking photos through a window usually results in the spots and marks on the window being captured and the desired object blurred. However yesterday magic happened and I captured our frequent visitor (or are there many visitors?) through the window. 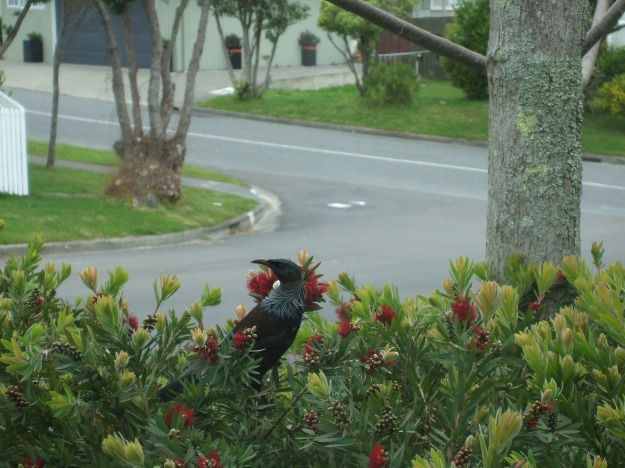 Don’t you love the shawl of feathers across the back of its neck and the glorious feather colours?

It is fascinating to stand and watch the bird come to feed out of this bush. If only the sun would shine and warm us all, the bush might then cover itself in its tasty and fire engine red “bottle brushes”. The other piece of good news is that there are two more of these bushes growing alongside the big one….more Tui Tales to come from those as they mature. 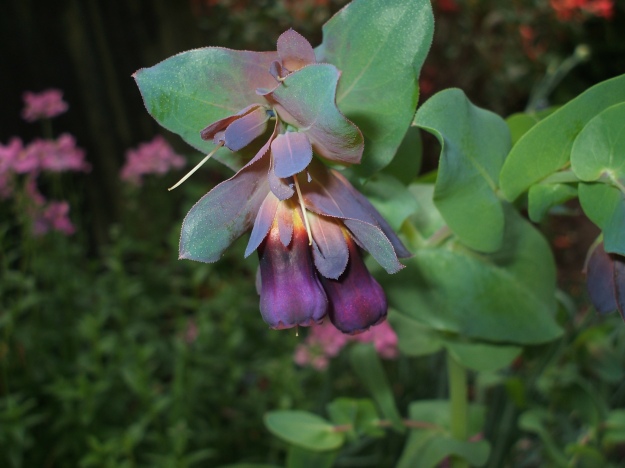 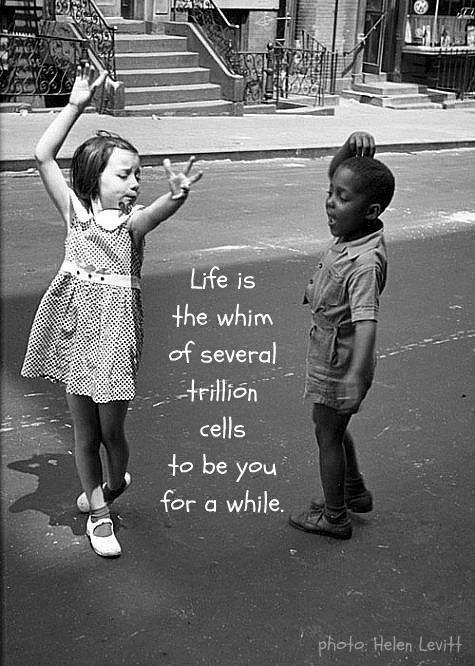 I went back to the Aotea Lagoon for another walk in the sunshine and to see the Paradise duck family again.

Here is Mum standing guard while Dad is not so far away but guarding the other angles.

Clever birds. But where are the ducklings?

As usual they are between the parents but down in the water playing in a cove-like area of the stone edging, near a pipe outlet.

Suddenly, as small creatures do, it is time to explore other areas. Up on to the warm path. 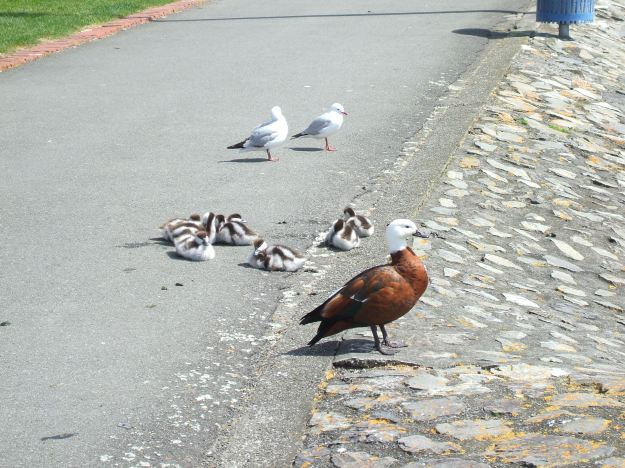 After several dashes back to the water and back up to the path, the parents decide it is nap time.

They escort their brood across the path, but there is always one isn’t there?

But this baby knows its parents will not leave it behind, snoozing on the dangerous path. Come over here on the grass where there is less traffic.

Happily the wee ones snuggle together for nap time in the afternoon sun with Mum and Dad standing on guard once again. And Mum can even risk a little preening time. 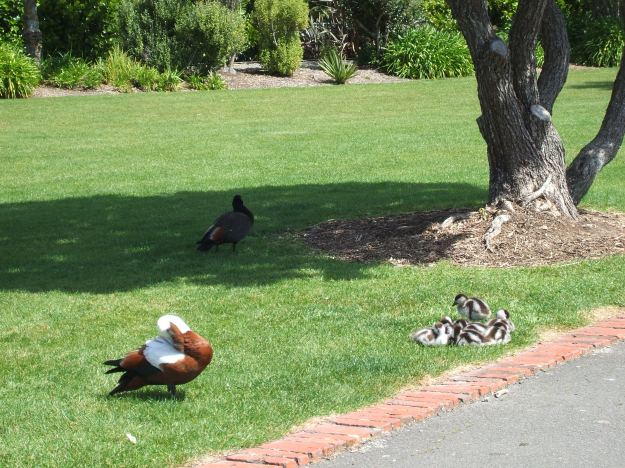 Sometimes nature puts colours together in ways that totally surprise me.

This self sown Aquilegia or Granny’s bonnet is nestled up against this 30 year old azalea, providing an interesting colour contrast. 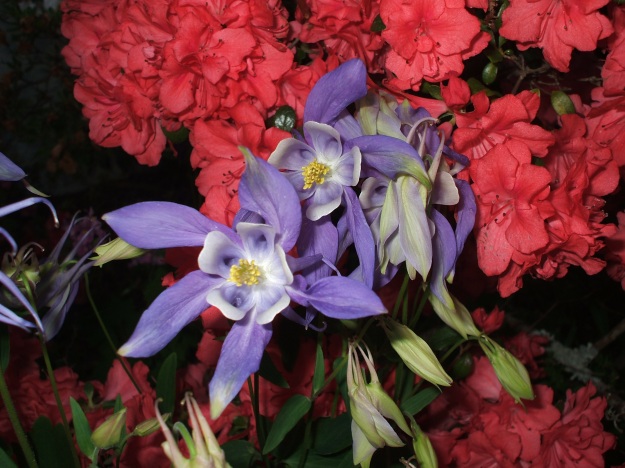 The other total surprise here is the vibrant and dramatic flowering of this azalea.

I have never seen it bloom with such abundance and intensity in the 24 years I have watched it. The only thing that has been done differently is that I have rinsed out the 2 litre milk bottles on the way to the recycling bin and this plant has been the recipient of these very watery dregs.

Other aquilegias are flowering nearby in several different colourings. They are beautifully delicate in shape and shade. 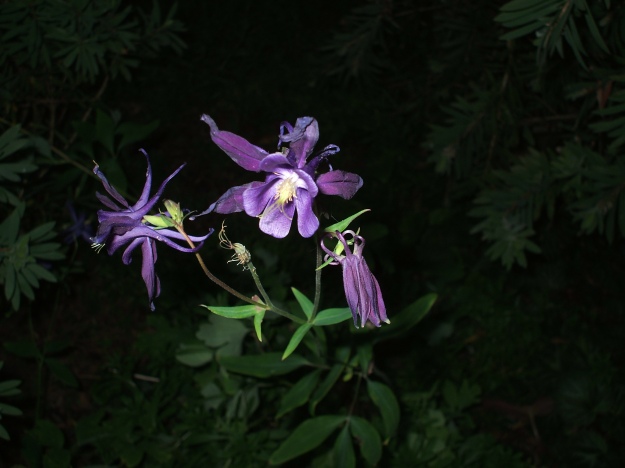 We put on our warm jackets and headed out to the Aotea Lagoon yesterday after the storm had passed over. I had a degree of cabin fever. The southern end of the Lagoon area is more sheltered so we walked around there noting the effects the gales had had on the wisteria and the blossoms that had been so luxuriant the week before.

The surprise came when we saw this lovely family of Paradise Shelducks ( Putangitangi) out for a Sunday afternoon expedition and free meal from the children with stale bread on offer.

Paradise ducks mate for life and these two were vigilant, attentive parents. I love the zebra-like markings on their 8 wee ducklings.

Mother duck is at the front of the photo, while Daddy duck holds the rear guard. Nature determines that the mother has the brighter plumage in this species.

I have been reading and enjoying ” Garden tours – A visitor’s guide to 50 top New Zealand Gardens.” by Michele Hickman.

My memory was jogged when I came across a reference to the giant Himalayan lily, Cardiocrinum giganteum.

Garden notes indicate the following : 2m to 3.5m spires of creamy, fragrant trumpet flowers in summer. These woodland plants may take 3 or 4 years to flower.

I saw these spectacular plants flowering when I visited Pukeiti in January 2007. Are they not amazing? 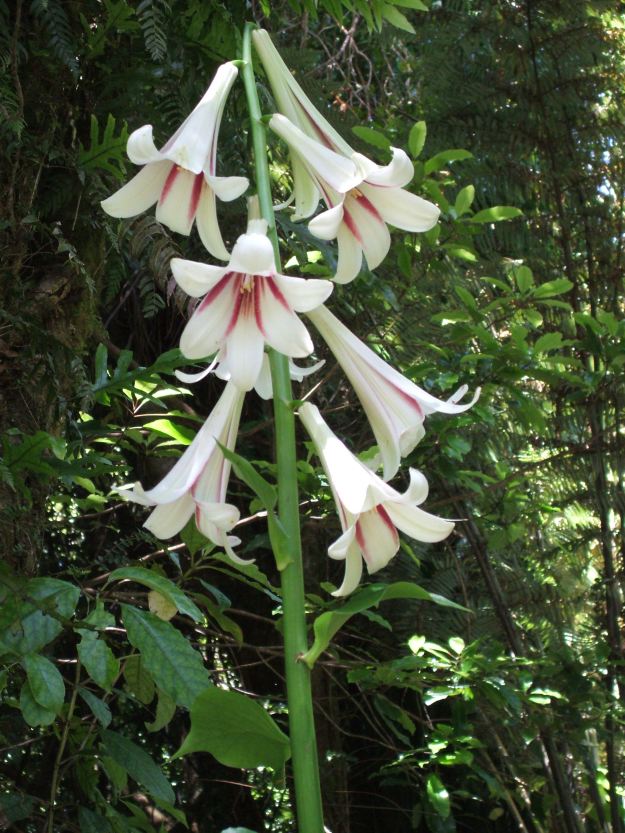 From green to cream to white, the Snowball Tree ( or Pompom tree) Viburnum Opulus Sterile in my garden. Right now trying to withstand the big spring storm we are experiencing. 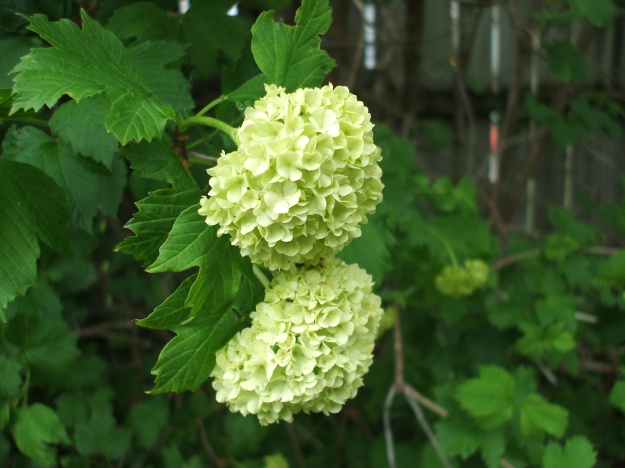