On a cool and very blustery day I found this cicada sheltering on a rock in the garden. 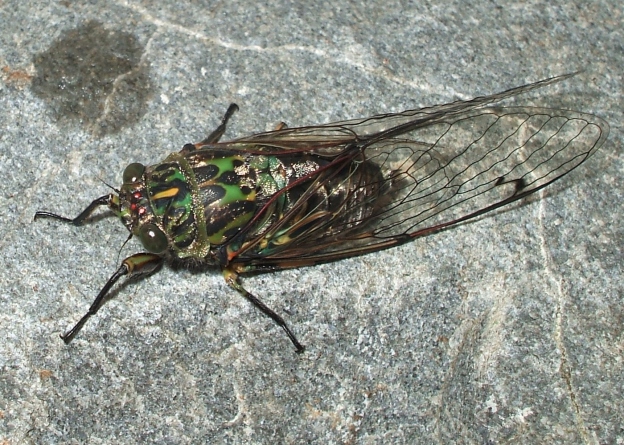 It has been a dull season so far for these familiar summer companions here in New Zealand.
As my A.W.B Powell’s “Native Animals of New Zealand” tells me: “On a hot summer’s day the air seems to crackle with the volume of sound produced by hundreds of these insects singing together.”

The sound of cicadas has been missing, in the main, this season with so many windy days and cooler temperatures. Perhaps there will be a late run of the cicada chorus.

And for a humorous quote about cicadas please visit my post here.

And for a fascinating piece about the star Sirius and traditional Maori beliefs check out this post and the comments.

Look who I spotted out in the garden a little while ago. 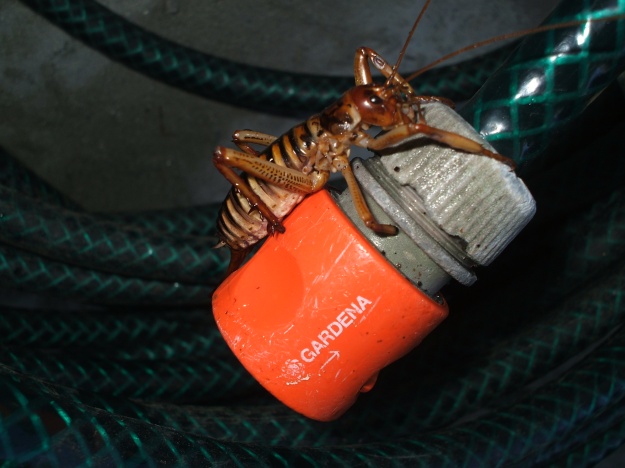 It is a female tree Weta.

The weta is only found in New Zealand and is so old it has outlived the dinosaurs.

• Weta are large by insect standards. Some of the giant weta are enormous and are amongst the heaviest insects in the world

• The weta is sometimes called the dinosaur of the insect world

• The weta is more primitive than the tuatara. The weta has changed very little in the past 100 million years.

• Weta have their ears on their front knees and can feel the vibrations of noises around them.

• You can tell a male and female weta apart because females have a long ovipositor, which looks a bit like a stinger, which they use to lay eggs.
Source: http://www.kcc.org.nz/

While she was happy for me to take the first photos when I moved the hose to get a different angle she raised her back legs in the air to frighten me off. I quickly snapped these two photos and left her to her own devices.

Weta are a threatened insect in New Zealand and I am happy to encourage them to live happily out in the garden.

The first new season’s bloom has appeared on The Wedding Rose. This rose was planted earlier this year, not long after the family wedding we had celebrated.

Upon closer inspection a “wedding guest” has enjoyed a feast on this bloom.

I suspect a katydid has scissored off some tasty mouthfuls of this lovely flower. The warm, creamy petals do look good enough to eat. I may have to search for the unwanted guest and relocate it elsewhere in the garden to avoid further blooms being munched on.

Here is a link to more information about Katydids which include some stunning photos.