Here is a funny cartoon for those readers who belong to the “Save the apostrophe society” and who yearn for the days of correct grammar.

The Man of the House and I have fallen prey to a miserable virus. There is a line-up of immune boosting supplements, cold and flu relief products, boxes of tissues, cough lozenges and extra fluid options in evidence at the moment.
We have needed an abundance of healing vibes and green is a colour for that. The beautiful light and my need for some fresh air drew me out into the garden on Thursday as the sun was lowering in the sky. Greens everywhere took my eye and offered freshness and something of a mirror to our current vulnerability.

Fresh and new growth does not always survive an onslaught.

But in a turn for the better, as the dreary symptoms begin to abate, I spotted this beauty as I ventured down to the shop for some more cough lozenges for the MoH. It heralds a return to being “in the pink” once again and we are really looking forward to that! 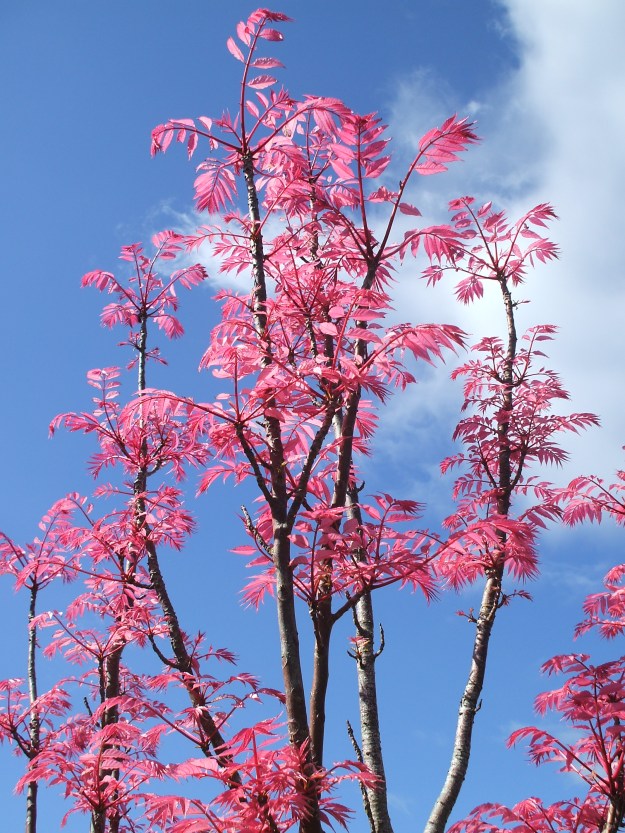 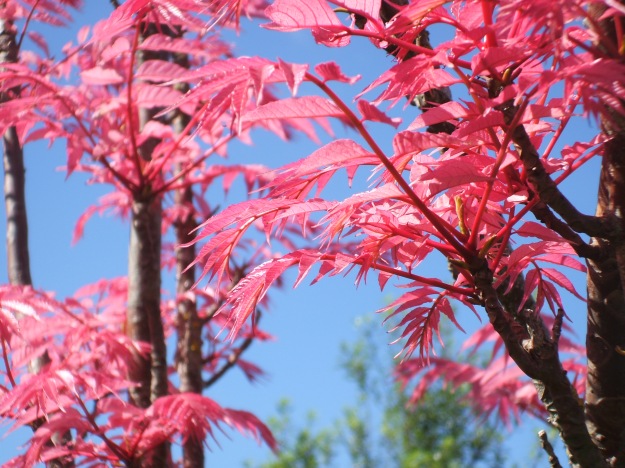 By the way…..this is a Chinese Toon tree and it always reminds me of Dr Seuss and his wonderful stories and rhymes which hold so much wisdom and offer so much fun and laughter (which is the best medicine!!)
You can go here to find out more about this amazing tree and how it has even more medicinal uses.

I see on my blog stats that over 1000 comments have been made on my blog.

Thank you to all the people who follow my blog and to those who have left comments over time.

It went something like this: “Thanks for reading my blog and leaving a comment. At least I know that I am not constantly talking to myself.”

I appreciate hearing from you. Take care out there.

Recently I reread the original edition of Robert Fulghum’s book “All I really need to know I learned in kindergarten”.

I first heard one of the stories from this book when it was read to me in an Accelerated Learning course. The story was called “Where do the mermaids stand?”

It was a story which spoke to me and it was one I often read to women in self awareness and self esteem courses I ran.

So what is it about Robert Fulghum’s writing that appeals to me, that speaks at times profoundly to me and which can cause me to nod slowly in agreement with him or to laugh out loud with him?

He is interested in quirky things; he comments on the ordinary things in life; he laughs at his own quirks, idiosyncrasies, habits, beliefs and behaviours and in some way makes allowances for the reader to have the same bumbling, complex humanness.

He finds value and enjoyment in the great diversity amongst us all. He reminds us that we are all simply trying to get on with life in the best way we know how; he is keen on opening and easing the mind and in so doing expands the heart.

He offers some very simple observations around what makes us extraordinary people and some really simple guidelines that help make life work.

I really like his style, approach and attitude and it is with interest that I learnt from his website that in 2003 the 15th anniversary edition of this book was released. Fulghum has revised and expanded the original essays. The preface is new and there are 25 new stories in it, all of which tell us that ordinary events can hold universal insights.

As I mentioned in my post “Backyard Cricket and Barbeque” it was the women’s turn to gather a week later and honour the bride to be.

So last Saturday a dozen or so invited women gathered at the bride’s parents home to enjoy a Bridal shower. It was my first experience of a bridal shower. I was more familiar with Kitchen Teas so it was with some relief that the invitation asked us to bring a Xmas tree decoration for the bride to decorate her first Xmas tree. Note: the wedding is a calendar month away today. Yes, a Xmas eve wedding.

In terms of organization, compared with the men and the Stag do the previous week, this event was an example of a well-oiled, highly organized and skillfully arranged and prepared celebration. The bridesmaid had done a superb job handling the whole thing from start to finish.

We played some really fun games, we ate from a groaning table with lots of food, and some specially made to accommodate dietary needs. There were prizes and surprises and to cap it all off we were entertained by four talented female singers from the choir Nota Bene. The singers had been given a list of the bride to be’s favourite Xmas carols and songs and from that they selected numbers that worked well with their voices.

While the men had scurried about and found various articles of clothing to wear to the stag do that fitted the theme, we women agonized over the old chestnut of what to wear. Did we dress right up, go casual or smart casual? I am relieved to report that we all looked fine in what we wore and the bride to be looked radiant.

So the countdown is really on now. I am off to write a list of things that need to be done before the wedding and Christmas. You will understand why my blogposts have thinned out lately…..there is a lot to do.

The groom-to-be in the family had his stag “do” on Sunday. He decided he would like a barbeque after a game of backyard cricket, to be held at a park area a little up the coast from here.
Instructions to the invited men included that they were to come dressed as their favourite cricketer.

There was much hilarity and nostalgia here on Sunday as the cupboards and drawers were rifled in attempts to find suitable clothing to fit the desired look.

Out came a hand-knitted, cable-patterned sleeveless pullover that I had knitted a long, long time ago and which now fits the owner rather too snugly. A machine knitted wool jersey appeared that my mother-in-law knitted many years ago to help keep out the mean cold winds that can sweep our cricket grounds even in the height of summer.

And then a variety of white floppy sun hats and caps with various embellishments were tried on, laughed about, memories shared and selections made.

A real find for the male being honoured was a precious t shirt he wore with much devotion as a child in the 1990’s. The t shirt was printed in recognition of a national cricketer’s retirement, noting his service to the game.

How that ever fitted him on Sunday is beyond me but I gather our “groom” squeezed into it and wore it in good humour. He was also required to play the whole game with his dominant arm/hand tied in a sling, in order to even up the play as only one or two of the gathered number play cricket regularly today.

The game had various “rules” that were altered as the game went along, keeping in accord with backyard cricket games and certainly not to be found in standard rule books. No one knew who won but it sounded as if they had a lot of fun and mercifully no injuries were sustained.

As for the barbeque the meat and bread and tomato sauce were the popular items. A lolly cake was devoured with gusto but the strawberries and salad hung fire…..no surprises there.

It was good fun standing back and watching the preparations and noting the differences when men organize “dos” and share food together.

This weekend it is their turn to watch and smile as the females gather for the bridal shower!

I found this in an old Church recipe book.

“Equal parts of health, honest work, rest and recreation, mixed carefully with diligence, cheerfulness and an even temper.

Sift them through the sieve of determination to get rid of any lumps of idleness or despondency.

Then bring the whole to a cream with the milk of human kindness and spirits of consideration and sympathy, stirring each in gently with an inspiring hand.

Add to this a sparkle of smiles and colour with laughter, a mere thought and a few illusions.

This mixture can be made at home by anyone.”

What does the wee phrase “a sparkle of smiles” bring to mind for you? I’d be interested to know.

So here are a few things that have happened today. It has been a good one.

 I realized that the very cold weather we have had this week is just the thing to stimulate my newly planted garlic bulbs.

 The coffee was good and hot at the café this morning

 I walked around the lake near our shopping centre and enjoyed the winter light, the water, the birds and some stunning colours that surprised me in the depths of a steely, raw winter’s day

 Hot soup was just the right food for lunch

 I took some interesting photos on a walk near my home. I’ve included these two of a Melia tree near our local dairy. It looks so vastly different to the one in my garden.

 There was some humorous television to watch in the evening.

And I found a new blog which I will be following closely with great interest. I’d encourage you to have a look:-)