Tui do a very long day. They are often the first bird to call the dawn and here as the dark draws in deeply last evening is a Tui having a drink at the feeder.

The full moon was beaming down last night as I let Jazz outside into the clear, chilly conditions. Jazz is rather partial to the full moon and its dramatic light. Perhaps all cats are.

My eye was caught by pretty lights on the Magnolia tree. The green, glossy leaves of the white, tulip flowered Magnolia were catching the moonbeams and “decorating” the tree in splashes of white shininess as if someone had strung fairy lights through the tree.

My point and shoot is not a great camera to use in the darkness but you may be able to make out the lights. The effect in real time was bright and beautiful.

As dusk began to come down and the predicted clouds began to roll in the sun and sky responded in some unusual displays.

The last of sun was disappearing behind a hill as I went out into the gloomy garden.

It was very surprising to notice some minutes later that the sky had lightened again and these lovely crepuscular rays were brightening the garden. Out I went again with my camera. 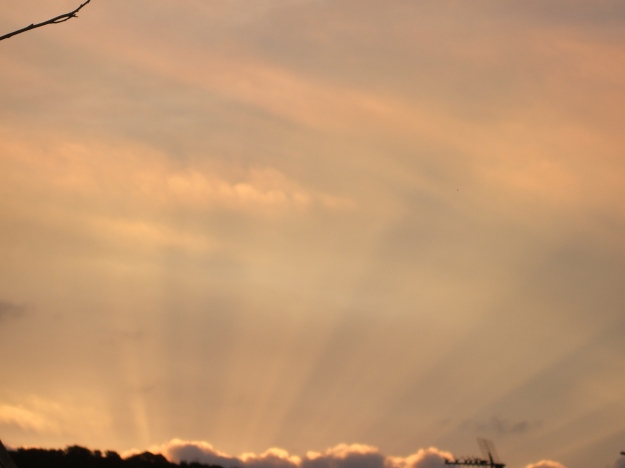 This light display was very short-lived giving way to the darkness almost within seconds.

Some time earlier this week, in the dark of the night my 10,000 visitor turned a page on my blog.

While WordPress offers a range of statistics it is impossible for me to know who the visitor was.

So thank you all for visiting and reading my blog. Here is a bouquet of roses for you all as a small token of my gratitude. 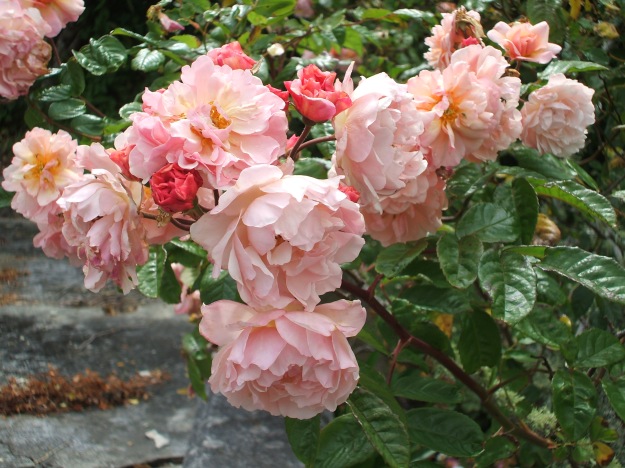 Sunday night was one of the first crystal-clear, cloudless nights we have had in a long time this summer. While it was cool outdoors there was no wind and the suburb quietens earlier on a Sunday night as people prepare for the week of work ahead.

I needed to go in search of our cat who was also enjoying this special night outside. As I left the house I could hear the welcome calling of our little native owl, Ruru or perhaps more commonly known as the Morepork owl.

The name “morepork” was given to it by European settlers who rightly thought its call sounded like “more pork”, “more pork”. Maori described its call as “Ru, ru.”

Hearing the cry of New Zealand’s only remaining native owl reminds me of my childhood. Summer holidays at beaches that were once remote spots would mean I would often fall asleep listening to the call of this small, sharp eyed, sharp eared owl.

It is special to hear it in such a busy urban environment but once again it is testament to all the effort that has gone into predator control, the establishment of nearby wildlife sanctuaries and the retention of large stands of trees. I hope we hear more owls calling in the night.