I’ve copied and pasted a comment by Russell Plume on Tuesday this week about his creative work piecing old weathered pieces of brick into quotations from Shakespeare and what may yet appear in a setting for all to enjoy.
Good morning Lynley,
The comments attached to your post are very touching. Thanks to you and to your readers.
I have three more settings that have yet to appear along the wall.
“There is a tide in the affairs of men” from Julius Caesar.
“Out damn’d spot, out I say!”. A desperately unhinged Lady MacBeth giving a gentle reminder to dog owners… .
“Ahakoa iti he pounamu”. A Māori proverb: “Although small it is precious” (another reference to Plimmerton…).
The complete collection is still a work in progress.
The ‘tide’ setting has a home which hasn’t been constructed yet. The other two are orphans.
Were you aware that “Brevity is the soul of wit” is above the surge wall 4 or 5 houses south of Queens Ave (down to the end, turn left)?
Thanks again for being so supportive.
Cheers
Russell

I have blogged about them here, here, here and here.

However in my haste on the chilly beach earlier this week I missed this setting.

On a glorious summer’s day yesterday I took a photo to ensure a complete record from the beach front.

I also walked to the local amateur dramatic theatre nearby to record this quote.

I follow the Facebook page that Russell has set up here so I will post updates as new settings find a home. My blog statistics always lift dramatically when I post about these quotes by the sea. There is a real interest in them globally.

Here are the rest of the settings along the surge walls at Plimmerton Beach, Porirua, New Zealand.

I first posted about Russell Plume’s creative use of washed up pieces of brick to form quotations from Shakespeare here here and here.
Here is a piece of brick in the sand from my wanderings today. 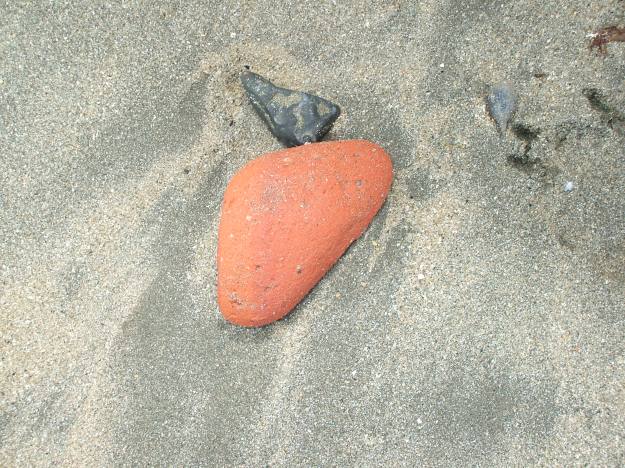 Just the same as those Russell has picked up in his wanderings and used to form the quotations.

Russell had intended that this quote be permanently placed somewhere in Christchurch to recognise the people there and all they had experienced and endured from the 12,500 (and probably more) earthquakes since 2010.

I follow the Shakespeare by the sea Facebook page and learnt a day or so ago that this setting of the quote has been erected on one of the sea walls along Plimmerton beach in honour of the people of Christchurch. From the Facebook page: What is the city but the people? Dedicated to the people of Christchurch. Installed January, 2014 by Porirua City Council. Many thanks to them and to the Mayor Nick Leggett.

This setting is installed on the fence at the property on the north side Queens Ave (go to the end of the street, walk down onto the beach, and turn right).

And so I followed the directions this morning and here is the quote for Christchurch.

Here are some of the other quotations Russell created along this stretch of my favourite beach.

Earlier in the year I blogged about a local man, Russell Plume who had used old pieces of brick that he had found on Plimmerton beach and in the local stream to form quotations from Shakespeare. He has made settings of these quotes and several are mounted on sea walls at Plimmerton Beach.

Russell stumbled upon my blog during the week and left a welcome comment here.He has also set up a Facebook page called Shakespeare by the Sea, Plimmerton which includes photographic detail of how he constructed the pieces. He would welcome your interest.

With the tide going out this morning and a lovely late summer morning I headed back to Plimmerton Beach to capture the other three panels of Shakespearian quotes made by local resident Russell Plume. The first panel I photographed is here.

Some time ago there was a local newspaper article about Russell Plume, a local Plimmerton resident and former geologist who was picking up pieces of brick off the coast near Plimmerton beach.

He gradually collected a lot of bricks. Some were whole and others simply odd shapes and pieces. All had been weathered by the sea or by the streams and it was thought that they were washing up from an old quarry.

A friend commented that he had enough to spell out the works of Shakespeare and this spurred Russell on to producing 9 panels of quotes from Shakespeare using the bricks just as he found them. None have been altered in any way.

Here is one I captured yesterday on a sea wall at Plimmerton Beach. My timing was not in tune with the tides yesterday which meant I could not walk along and take photos of the other panels. I will do that another day.

The linked article gives you more details but I also hope the panel he made as a gift for Christchurch will reach that destination and bring hope to its residents.

“What is the city but the people” (from Coriolanus), is a fitting quote.