A few weeks ago I purchased this feeder for our garden.

The bottle contains sugar water which supplements food for the nectar feeding birds. It is my hope that the Tuis will visit the feeder during the months when their natural foods are scarcer. 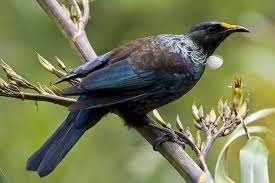 We also lost our largest Kowhai tree in the June storm. It was a “maybe it can be saved” to a definite “no it cannot be saved” decision. 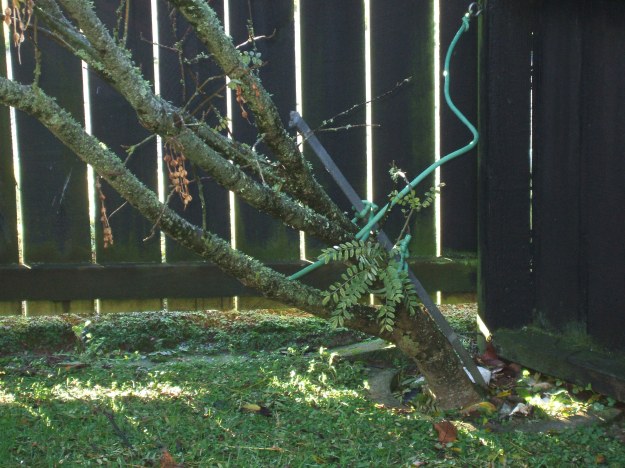 While we have transplanted a teenage kowhai tree from the back of the section in to its place, it is unlikely to flower this season. 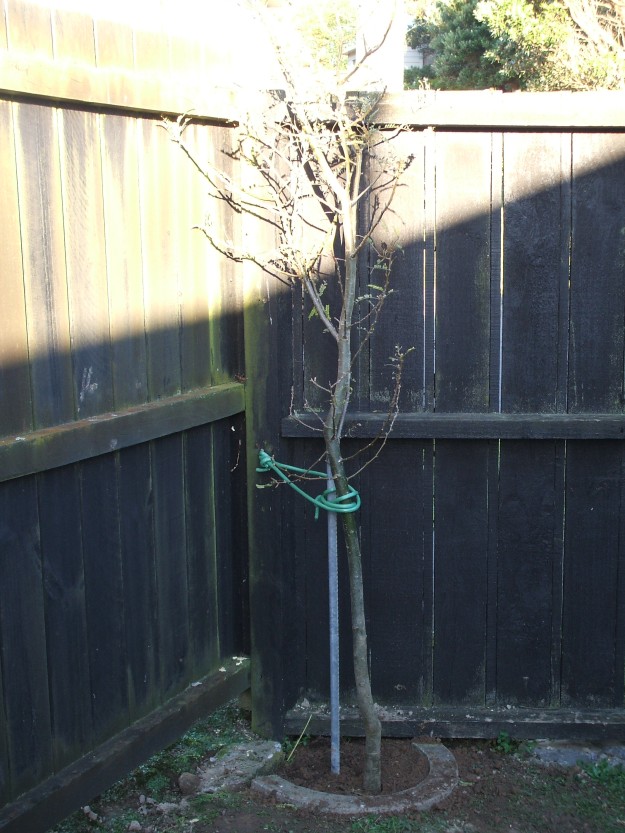 So the sugar water feeder was another offering to the Tuis in lieu of the tree they have enjoyed in the past few seasons.
My plans have gone somewhat awry with spring bursting into fullness here weeks early. The Tuis are currently spoilt for choice as every local kowhai tree is laden with the golden nectar-bearing flowers they adore eating. 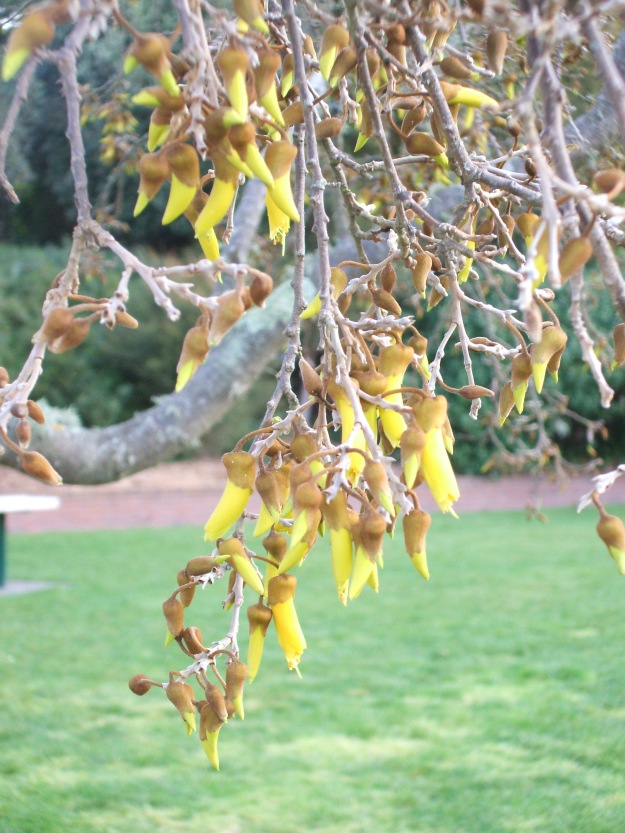 On a positive note the tiny wax-eyes have thoroughly enjoyed the feeder. ( The sugar water is coloured with a minute drop of red food colouring to attract the birds.) 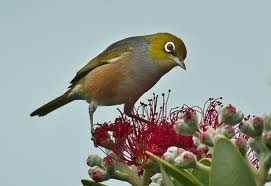 We do, however, provide another facility for the Tuis and many other birds, in a rather more unintentional way.
When the spouting or guttering that channels rainwater off the house roof was installed, mistakes were made. The length was slightly short and the fall to the down-pipe was too shallow. This results in rainwater pooling at the higher end of the spouting. This provides the best bird bath in the world if daily numbers of birds using it is anything to go by. The Tuis being the largest of the bathing birds make a huge din and splash the water vigorously on to the concrete and parked car two storeys below.

So I may not be feeding the Tuis well at the moment but I am helping to keep them clean.

The Kowhai trees have finished flowering and so the Tuis need to find other food to sustain them. Tuis have proved to be versatile and adaptable birds which enjoy nectar from introduced trees and plants as well as native trees and flaxes. 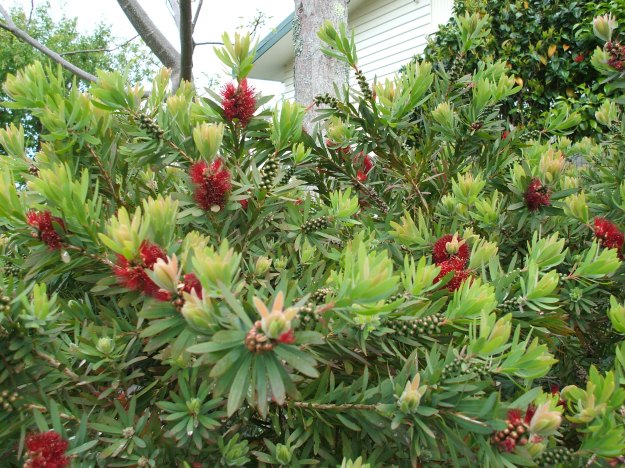 It is well over 1.7 metres tall so not really a dwarf. It is bursting, slowly, into bloom at the moment and I am now treated to the following Tui antics if I am working at the bench.

The tall, wide spreading Melia tree stands above the Bottle brush and provides superb perches for Tui to rest on, sing from and to launch off into the nectary goodness of the bottle brush below.

There is no wing flapping, just a simple drop off this branch into the slender branched bush.

The drop reminds me of children “bomb” diving off the side of a swimming pool.

As the Tui lands the bush shakes and shivers and continues to do this while the bird moves about finding its next feed.

The shaking and shivering often alerts me to the fact that somewhere in the bush a Tui is feeding. Every so often a head pops up or as happened yesterday the flowers, highest and closest, to the house prove irresistible.

Getting to take a photo of any or all of these antics is tricky. The front door opening close by sends the Tui fleeing and standing near the bush waiting for a photo opportunity has not resulted in any activity. Tuis are wily birds.

Taking photos through a window usually results in the spots and marks on the window being captured and the desired object blurred. However yesterday magic happened and I captured our frequent visitor (or are there many visitors?) through the window.

Don’t you love the shawl of feathers across the back of its neck and the glorious feather colours?

It is fascinating to stand and watch the bird come to feed out of this bush. If only the sun would shine and warm us all, the bush might then cover itself in its tasty and fire engine red “bottle brushes”. The other piece of good news is that there are two more of these bushes growing alongside the big one….more Tui Tales to come from those as they mature.

I’ve completed my annual bird survey today. The instructions were to record the largest number of each type of bird that was seen or heard at any one time – not the total number of each bird over the hour. That was a bit complicated but bird numbers were low in the garden today so it was not as arduous as I thought it might be.

The common sparrow headed the list, followed by wax eyes, blackbirds, chaffinches, starlings, and goldfinches. I could hear a Tui over the road feasting on the red flowering gum trees so that was included too.

I blogged about the 2011 bird survey here.

I received an email late this afternoon telling me that a new website is being set up so that I can record any observations relating to nature but it will also be where future annual bird survey results will be loaded. I’m really pleased about that as there are times when I see a new bird in the garden and wish I could tell someone “official” about it.

The other numbers I crunched today were on my blog. WordPress provides a raft of statistical data and I do check my stats regularly. This post will be number 308. My readers have posted 966 comments and I now have 70 blog followers.

Thank you to all my readers. It is very gratifying to know that you enjoy my postings and continue to turn the pages on my blog.

There is an interesting statistic amongst the people who regularly comment on my blog and that is that 4 of them have names beginning with the letter “J”.

I also have a regular group of “likers” and it is always a pleasure to find your “Like” appearing in my notifications.

11 of my blog posts have been “shared” and that seems an extra honour and potentially widens my audience.

Spam wins the day with 1,356 items that have been successfully thwarted at the cyber boundary of my blog and I am very grateful about that.

I began blogging with so much trepidation but now it is almost a habit and I miss the days when I don’t post something. I began writing to satisfy an inner voice but having gathered followers I feel spurred on to provide something that I hope will interest you in some way. My photography interest is proving to be very satisfying to me and that has been a surprise too.

Thank you again for reading, lurking, liking and commenting. You all enrich my days.